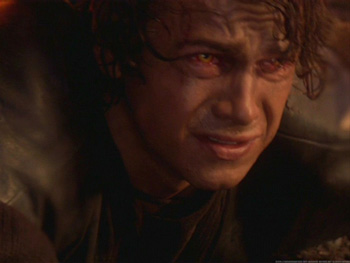 Sure, he was a petulant, child-murdering, republic-betraying monster, but he really loved his mum.

Game Developer Ross Mills is not a man to sit idly by as our youth are corrupted by poor role models, oh no. When he noticed that the Early Learning Center, a UK outlet that deals in delightful educational toys for impressionable kiddywinks, was selling toys based on Anakin Skywalker he knew he had to speak out.

“Now, I didn’t really mind,” blogged Mills. “I merely thought it amusing that the murderer of ‘Younglings’ would be thought of as a positive character in other section of the franchise, so, on a whim, I sent them an email.”

“Personally, I could not be more shocked. I thought the Early Learning Centre was a place for positive reinforcement of positive actions for children, but yet, here it was, actively promoting one of the most evil characters in the Star Wars universe. Anakin Skywalker,” he wrote; no doubt bristling with righteous fury.

He went on to list several of the character’s transgressions.

And, last of all, and the most important

Now, I ask you, how can you sell such toys, promoting such individuals, in your establishment?

I’d also like to add that Anakin whined and cried throughout the entirety of Revenge of the Sith, setting a terrible example for children everywhere.

In defence of the Early Learning center, a client support manager emailed Mills with an equally nerdy (and hilarious) response:

It’s unlikely that children of that age have seen any of the Star Wars films, however if they have I beg to offer the following counterpoints to ‘the sins of Anakin’

I would also argue that if a child has seen all the films they’ll see Anakin as a hero who went wrong but ultimately paid the supreme sacrifice to atone for his sins.

There may be better role models out there for a child, but for the period our toys are aimed at (the Clone Wars), Anakin remains very much ‘hero material’ and is a popular and welcome addition to our range.

He failed to mention that, as Darth Vader, Anakin is certainly a handicapable role model.

You can read the full exchange on Mill’s blog. What do we think, folks? Does Anakin’s eventual redemption make him a “good guy?” Or is the Early Learning Center unwittingly promoting child murder, parental abandonment and, worst of all, unfair hiring and firing practices?