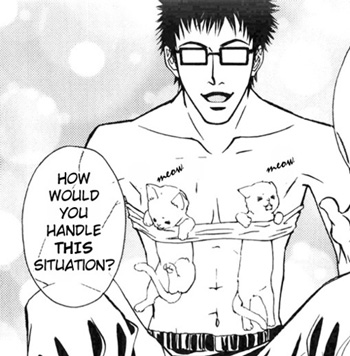 These minutes from a Japanese prefectural authority meeting show manga censors have some … odd ideas.

And, according to these minutes, taken from a meeting of the “2nd Miyazaki Prefectural Commission for the Promotion of Healthy Youth Development,” that seems to be what’s happening. At this point, the commission was discussing “boys love” and “ladies comics” which, although not-pornographic, do tend to be rather risqué.

In these books there is some violence and cruelty, and most have sexually provocative material.

In particular, many include scenes of women taking the lead ahead of men, and I think they’ll promote the prejudiced view that women want this.

And if you keep getting these depictions of women taking the lead, matters soon develop in a homosexual direction and it must become difficult to develop sexually in a normal fashion, mustn’t it?

This may not always be the case, but I think for the male consciousness they may end up thinking they cannot take the lead themselves, and so they tend to turn homosexual more often as a result.

I can’t help but think it is very dangerous to our young people, should they see this sort of material mixed in amongst normal books.

It’s hard to choose the most laughable concept; that the idea of women taking the lead in some romantic encounters is “predjudiced,” that exposure to such unnatural acts will turn unwary male readers gay, or that homosexuality is “dangerous.” Regardless, the concept of this person being in charge of censoring anything is terrifying.

No objection to these ideas were recorded in the minutes, but some commenters have suggested this may be due to the Japanese custom of avoiding public arguments. The group suggested that some manga should be labeled as “urgently designated harmful entertainment,” but did not recommend any specific titles for the classification.

EA ‘Couldn’t Be More Happy’ With The Old Republic Launch