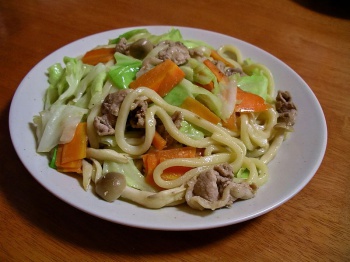 Udon is a kind of Japanese wheat noodle that is popular throughout the country, particularly in the Shikoku area. The Chiyoda Manufacturing Corporation, based out of Kagawa Prefecture in Shokoku, has taken the country’s love of udon to the next level – by developing a new kind of udon-to-methane electricity generator that promises to provide all of an average household’s electricity needs using nothing but leftover noodles.

The industrial machinery manufacturer has announced that, starting in September, it will begin production of electricity through the use of methane gas harvested from fermented udon. The company plans to collect leftover noodles and pack them into a large 26 feet by 26 feet tank.

Chiyoda believes that it will be able to generate enough methane gas to power the turbines all day and all night. It claims that this should in turn, generate 180,000 kilowatt-hours of power a year – enough to power 50 average households!

Chiyoda is getting these leftover noodles from what the excess of another of its udon-based projects – ethanol production using udon remains from a local noodle company. The company will supplement the noodles by collecting food waste from restaurants.

Currently, there is just the one magic noodles-to-electricity tank, but if it proves to be successful, Chiyoda is aiming to start taking orders by the end of the year.

Among all the confusion an fear surrounding nuclear power, and the devastating environmental effects of fossil fuels, could noodle power be the answer we are all looking for?