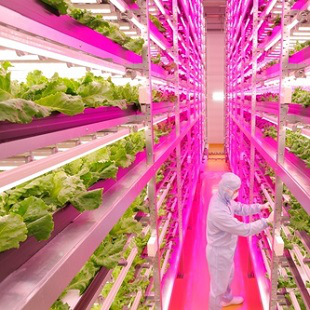 The GE Projects blog has a spotlight on Shigeharu Shimamura, a large-scale farmer in Eastern Japan that recently moved his lettuce-growing operations into an old Sony electronics warehouse.

The facility is 25,000 square feet, and is now producing 10,000 heads of lettuce per day. The method to the madness? General Electric-built LED lighting arrays that are specifically designed for plant growth.

The LED arrays and the lighting schedule provide optimum “night-and-day” cycles, keeping the photosynthesis process at its most efficient. The warehouse farm has a total of 17,500 LED lights fixed on 18 growing racks. Each rack has 15 levels, which is how 10,000 heads of lettuce fit into such a space.

Not only is the farm weather-proof (natural disasters aside), but it’s also incredibly water-efficient. Shimamura says his operation uses only one percent of the water used by a traditional lettuce farm with the same production rate.

If this sort of indoor farming is applied to other vegetables, it could help stem the tide against both food and fresh water shortages.