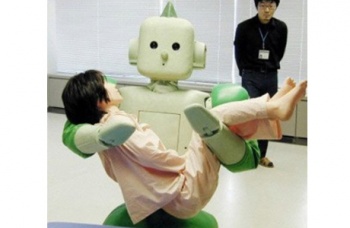 Japanese scientists have made a robot capable of feeling love. And woe betide anyone that gets in his way.

Lovable Kenji is one of seven robots designed to react “emotionally” to external stimuli as part of an experiment into replicating the more complex human emotions. One thing that researchers at Toshiba Akimu Robotic Research Institute didn’t quite understand is how some strains of love work.

At the start, it was actually quite sweet. Kenji would hold his stuffed doll close, cuddling it for hours on end. The researchers were thrilled with this until Kenji started showing some of the darker sides of love.

One of the young female interns started spending a lot of time with Kenji, sometimes several hours a day, and Kenji seemed to like her. So much so that he would often stand directly between her and the door out, refusing to to move.

Given he has 100 kilogram arms, the intern was rather worried about trying to move past him. In fact, she had to call technicians to shut him off after he moved to block her every time she tried to leave.

“Despite our initial enthusiasm, it has become clear that Kenji’s impulses and behavior are not entirely rational or genuine,” conceded Dr. Takahashi, one of the researchers.

Numerous attempts have been made to switch him back on, but every time they do so, he develops an instant crush on the next human he sees, and rushes to embrace them – with potentially fatal consequences.

Dr. Takashi has said that Kenji will have to be decommissioned permanently, perhaps proving that while we may be able to replicate emotions, controlling them is a very different matter.