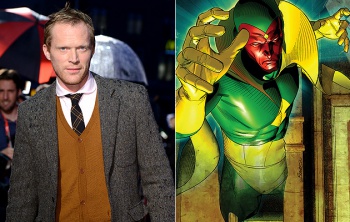 Whedon pretty much confirms what we’ve been saying for months. Potential spoilers ho!

Earlier this week, we learned new information about the titular villain in Avengers: Age of Ultron, and now it’s The Vision’s turn to get some details out into the wild.

Now, not to toot our own horns too much, but we’ve been saying for months that the casting of actor Paul Bettany – who already provides the voice of Tony Stark’s AI assistant J.A.R.V.I.S. – as Vision probably means only one thing: that J.A.R.V.I.S. will almost certainly be transformed into Vision. Spoiler alert: it looks like we were right.

Speaking to Entertainment Weekly, Age of Ultron director Joss Whedon opened up just a tiny bit about the fact that Bettany voices both characters, and he strongly suggests they are indeed the same character. “It’s not coincidence…” he said, but, he added “I’m not going to tell you any more about The Vision.”

Robert Downey Jr. weighed in on the matter as well. “Things only happen arbitrarily in Kevin Feige’s Marvel universe by mistake, and I think he’s maybe made two mistakes and they weren’t really in the movies,” Downey said. “They were more in like the easter eggs early on. Things that he didn’t have as much final say over but would nowadays…Yeah, I don’t think Kevin would let that happen. Again, it’s like if you think about the five different ways that [The Vision] could come together, this one’s definitely the most interesting of the five. I was running other scenarios and I’ve seen it progress over drafts. It was just kind of really good, right from the start.”

In the comics, Ultron was originally created by Dr. Henry Pym (Ant-Man), but he soon rebelled, declaring a vendetta against Pym and Pym’s wife Janet van Dyne (AKA Wasp), becoming one of The Avengers’ longstanding arch enemies in the process. Early-on, Ultron created the synthezoid Vision as a weapon against Pym and van Dyne, but Vision was quickly convinced to renounce villainy. He would eventually join The Avengers and become romantically linked to the Scarlet Witch. (read more about it here). As we learned earlier this week, the Marvel Cinematic Universe will diverge from this story, with Ultron beginning life as an AI created by Tony Stark to “assess threats.” No doubt Vison’s origin will see a related origin story makeover.

Meanwhile, we also get our first dim glimpse of how Vision will look. Of course, Marvel hasn’t shown what The Vision will look like in the film, but EW says it saw test footage of the character’s make-up while on the movie’s set last month. “[H]is face,” the publication says, “seemed to be a little more on the purple side of the spectrum than orange, the overall look of the synthezoid has a slightly more technological edge than the original 1968 introduction. He’s a bit more Borg and a little less Crayola.”

Avengers: Age of Ultron hits theaters on May 1, 2015, at which time we’ll all find out for sure whether or not we’re right to speculate that Vision and J.A.R.V.I.S. are the same character*.