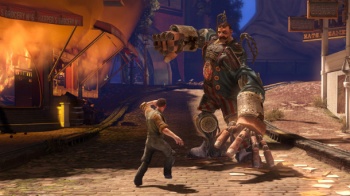 Motion controls are out for the third BioShock game, but 3D might still have a shot.

Ken Levine, creative director at Irrational Games and the brain behind BioShock, says that his studio won’t be supporting Sony’s PlayStation Move controller in BioShock Infinite. He says that he doesn’t want to add motion controls, unless Irrational is going to do something interesting with the technology.

Levine said that including Move on Infinite wouldn’t be for any other reason than to tick a box on a marketing checklist, or to make the platform holder – in this case, Sony – happy. He seemed dismissive of the technology – at least in the context of BioShock – joking that saving or harvesting Little Sisters would come down to waggling the Move controller in a particular direction. He thought that gamers could tell when a developer added a feature to a game for reasons other than making that game better, and that while Irrational could throw in Move support, its audience would know it was being “cheated.”

He was more upbeat about 3D however, saying that it was something he was more willing to consider, although he didn’t say whether or not BioShock Infinite would actually feature 3D. He said that 3D in games was a different challenge to including it in movies however, as it wasn’t simply a case of shooting it differently. But just as with Move support, he said that to really get the best results out of 3D, developers had to do something interesting with it.

Levine may be overstating things a little when he says that including Move support would be “cheating” players, but if Irrational really doesn’t think it will add anything to the game, maybe the time really is better spent elsewhere.