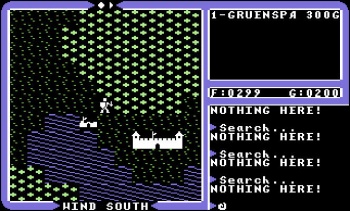 A college professor that teaches the history of videogames has noticed that kids simply cannot grasp Ultima IV.

Michael Abbott teaches a course called The Art and History of Electronic Gaming at Wabash College, and is known for spreading the videogame love to another course where students must study Portal. In an interesting article he’s written on his blog Brainy Gamer, Abbott discusses the trouble kids have with playing older RPGs.

Abbott exposes his students to older titles like the original Fallout, Rogue, and Planetfall in his course. Most of the students handle being taken out of their comfort zones with the isometric strategy title, ASCII roguelike, and text-based adventure, but there’s one game in particular that they don’t seem to be able to handle: Ultima IV.

Origin released Ultima IV on the Apple II in 1985 and it’s acclaimed as one of the top RPGs for its time. Instead of having players focus on killing orcs, it required that they reach enlightenment within eight virtues to become the series’ Avatar. Its character creation system, conversation system, and huge world are examples of what players liked about it.

But Ultima IV is very different from World of Warcraft and other modern games that hold the player’s hand and point an arrow at their goals. Abbott provided all the documentation that his students would need, but they didn’t seem to realize that the reading the game’s documentation was necessary.

One student said: “I’ve been very confused throughout the entire experience. I’ve honestly sat here for hours trying to figure out what to do and it just isn’t making much sense to me right now.” Another: “When I start a game I like to do it all on my own, but it’s been impossible to do so with Ultima.” A third: “I tried for awhile without any walkthroughs to get the full gamer experience sort of thing and within the hour I gave up because of a combination of bad controls and a hard to get into story for me at least. It reminded me of a bad Runescape.”

The comments don’t seem to be indicative of one of the top RPGs of all time. Students also call the game “boring” and “unplayable,” but when Abbott questioned whether they read Ultima IV‘s documentation provided in PDF format, it turned out that not a single one had. “Wow,” one replied when Abbott told him that the game’s designer, Richard Garriott, expected players to read the manual first.

Abbott believes the “gap separating today’s generation of gamers from those of us who once drew maps on grid paper is nearly unbridgeable.” Indeed, this seems to be true about a lot of games from the 1980s and 1990s. While certain games were revolutionary for their time, even I find it hard to go back to older titles that I once enjoyed immensely, so it’s unlikely for the average teenage Halo player to be able to realize the impact of a game like Ultima IV. Abbott no longer assumes “the game will make its case for greatness all by itself,” and says he may take a more hands-on educational approach in regards to the classic RPG.