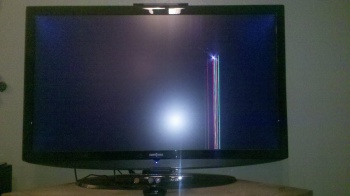 The frenetic action possible when playing with Kinect has damaged its first expensive television.

Phil Villarreal is a writer living in Tucson, Arizona with his two children. At around 1:30am this morning, he was playing Kinect Sports by himself after the kids had likely gone to bed. While playing the volleyball game, Villarreal made a violent overhead motion with his arm to approximate spiking the ball over the net. Unfortunately, Villarreal was playing below a ceiling fan with a pullstring. His violent action dislodged the string from fan, shooting it directly into his new-ish 47-inch LCD TV. Now, the TV has a large multi-colored streak of broken pixels, rendering it worthless. All because Villarreal was playing with Kinect, which he couldn’t have had for much more than a day.

Villareal called himself the “first moron to break his TV with Kinect” on his blog and phrased the news as a Public Service Announcement: “Do not under any circumstances play Kinect Sports Volleyball at 1:30 a.m. while standing under a ceiling fan with a dangling chain for a light switch. You could conceivably spike it into your year-old amazing TV, causing it to die with a rainbow LCD teardrop dripping down from the impact wound.”

He added: “Plus you’ll lose the match by forfeit.”

So not only did Villarreal lose his TV, but he automatically lost the game too. That’s just cold.

Source: Because I Told You So