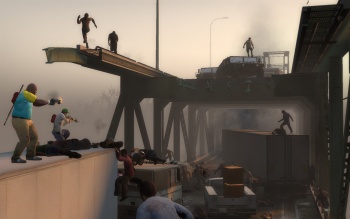 When Gabe Newell decided to boycott one Left 4 Dead modder’s campaign, there was only one thing left to do. Turn the tables on Gabe and fly him out to end his boycott.

Boycotts are sometimes a productive means of protest here in our free market democracies, but they aren’t always warranted when it comes to videogames. Some extremely vocal boycotters of Valve’s Left 4 Dead 2 learned that when Valve flew them out to test out the game they so vociferously protested and found they suddenly liked. That was a good call by Gabe Newell to be diplomatic, and break down the antagonism. Everybody seemed happy, well, at least aside from the scorned gamers who didn’t get to go.

One of those gamers, a Left 4 Dead modder who goes by the name “Joe W-A,” decided to use his established relationship with Mr. Newell himself to protest this injustice. “Why the hell haven’t I been flown to Valve?” he asked in an email to Newell. “I mean, you guys need to preview my campaign.”

To which Gabe, in an about face from his seemingly anti-boycott stance, said, perhaps in humor but maybe possibly perhaps in utter and absolute seriousness:

“We are boycotting your campaign.”

How to break down a boycott? Why not just take the same approach as Valve, Joe thought. “Does…does that mean I have to fly you here?” he asked Newell.

“Me and Erik,” Newell replied, referring to Valve’s Erik Johnson, who was CC’d on the email.

So Joe W-A – who actually isn’t angry at Valve and seems to be having quite a bit of good-spirited fun with this – has started a Paypal fund accepting donations for the airfare to fly Gabe Newell and Erik Johnson all the way to Brisbane, Australia so that they can test out Joe’s campaign and see for themselves, like the Left 4 Dead 2 boycotters, that boycotts are silly and pointless. Joe promises that if Newell and Johnson decide not to go that he’ll refund the money. Otherwise, if they do come and he has spare cash, he’ll buy a camera and record the whole damn thing and put it on YouTube. Sounds like plenty of reason to chip in a few bucks to me.