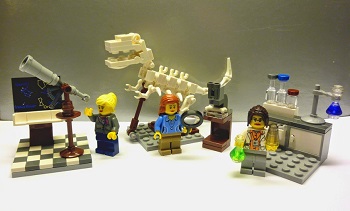 Back in early 2012, LEGO revealed a lineup of toys called “LEGO Friends”. This was the first set LEGO directed towards girls and focused on shopping, beauty, and decorating. Dissatisfied, LEGO fan Ellen Kooijman (who also goes by Alatariel Elensar), submitted her concepts for minifig sets based on women in science. Similarly, people took to blogs and social media to complain about the stereotypical “Friends” line. LEGO announced last month that it would mass produce a set of three minifigs based on Kooijman’s design.

Kooijman, a geochemist and fan of LEGO, discovered LEGO CUUSOO (now LEGO Ideas) in 2012, a platform for submitting LEGO concepts. Once an idea received 10,000 votes, it could potentially be produced as an official LEGO product. Kooijman started with creating a minifig based on her profession and eventually created a dozen sets that covered everything from paleontology to courtrooms, but all represented professional women. Kooijman fianlly settled on a set which included a paleontologist, an astronomer and a chemist, and was comparable to the research institute where she worked.

LEGO approved, and nearly two years later Kooijman has received the final prototype of the “Research Institute” set, which she revealed and reviewed on her blog (as a scientist, she does her best to be “critical and objective”). The figures look great, and only one wears a “scientist uniform” (in other words, a lab coat). “It was important for me to convey the message that most scientists wear casual clothing,” Kooijman says on her blog, “only a few institutes have strict dress codes.” This also promotes the idea that careers in science are open to anyone, not just the “nerdy scientist” stereotype.

Most importantly, these are toys. They are directed at children and the sets include telescopes, labs, and large dinosaur skeletons. The figures offer multiple facial expressions, to help convey those stressful moments. Kooijman gives an example of a story children may create as her astronomer “spotted an asteroid plummeting towards Earth, the impact of which caused the T-rex to come alive.”

Kooijman posted a number of images of the minifig set on her blog, which you can also check out in the gallery below.