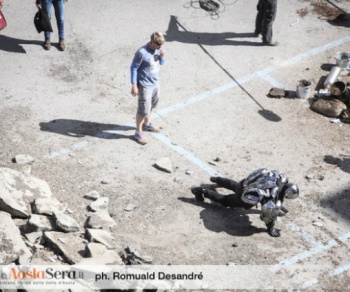 Marvel and wonder at these production images of Jeremy Renner’s Hawkeye, Aaron Johnson’s Quicksilver, and the mighty back of Ultron.

Right now most Marvel fans have their hearts a flutter for Captain America: The Winter Soldier and Guardians of the Galaxy, but many are eyes forward for what each film is building towards: Avengers: Age of Ultron. The movie is still in production and slated for a 2015 release, but at least one photographer was able to grab images of Marvel’s locations in Italy and leak them to Italian media site Bad Taste.

Given the nature of the images, you shouldn’t expect something that looks especially polished, but there’s a few interesting morsels assembled. Jeremy Renner’s Hawkeye and Aaron Johnson’s Quicksilver are among the images, and there are even glimpses of what appears to be Ultron himself. Well, Ultron’s back anyway. Assuming it isn’t just new Iron Man armor or James Rhodes going back to War Machine colors.

The majority of these photos take place in a parking lot that I assume is going to be utterly devastated over the course of a massive big-budget film battle. It’s not much to look at right now, but once Marvel’s had a chance to add CG effects and replace any motion cap actors on the set, it’ll be a movie moment that gets us all very excited. In the meantime, we’ll just have to wait for a few clearer shots of Ultron, which probably won’t happen until Marvel has some promotional materials ready.

Also, just out of curiosity, do you think the photographer taking these images had an “Oh crap” moment when it seemed like Hawkeye spotted him? The guy’s lucky Renner didn’t have his arrows with him.