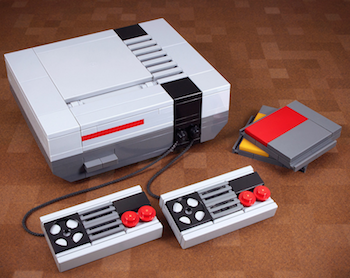 They even include proper wiring and internal components.

It’s always impressive when someone takes a simple childhood building toy and uses it to paint a massive tableau. However, it’s another thing entirely to make your models as small as possible. That’s what the talented Lego artist Chris McVeigh has a knack for. Among his huge list of Lego creations are a series of classic computers and gaming consoles. Not only are they small, but they’re also insanely detailed.

The gallery below shows off his work. You’ll see the Commodore 64, Atari 2600, Apple SE, Apple II and IIc, the Macintosh 128k, and of course, the NES. The models are filled with an impressive level of detail. For example, the Apple II not only has the proper wiring in the back, but you can also take it apart and see the internal computer bits. Even better, each of his models come with building guides, so you can see exactly how he did it, and learn his tricks. Aside from a custom decal here and there, they’re all standard parts.

As awesome as McVeigh’s work is, it’s still not quite up to the level of rebuilding an ancient Greek computer that actually works. That said, I think these models are impressive enough without actually being functional.