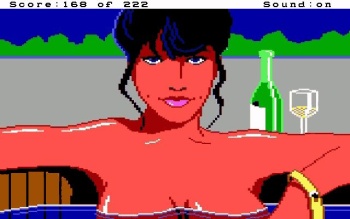 The lovable cad will return for new adventures to titillate teenage boys with his sexual antics.

Inspired by games like Softporn Adventure, Leisure Suit Larry in the Land of the Lounge Lizards was published by Sierra Games back in 1987. Players assumed the role of Larry Laffer, a poor young guy as he desperately tried to get laid. Like many adventure games of the time, you guided Larry through fetch quests and simple puzzles by using text commands but the reward was usually a naughty picture of a lady or some digitized humping. What made the experience more endearing than the iterations of this decade (Magna Cum Laude, Box Office Bust ) was the sarcastic writing full of cultural references and in-jokes among Sierra staff. After years away from the franchise, casual gamemakers Replay announced that the original designer and writer of Leisure Suit Larry, Al Lowe, will return to take the helm of a remake of the first game as well as start work on a new LSL title.

“Replay can also now create new games in the series,” said Replay’s representative. “The goal is to go back to the fun and tongue-in-cheek nature of the original games, rather than the fairly poor games released more recently.”

Replay Games is a small outfit based in Austin, TX. Founder Paul Trowe got his start in the games business with Sierra back in the 80s and he was finally able to negotiate ownership of all publishing rights to Leisure Suit Larry, including the ability to create new games in the franchise. You may remember The Escapist reporting the remake back in June, but a representative from Replay confirmed to us that this new deal is for the whole banana.

“This deal is much, much broader and more exciting. Replay now has the global rights to the whole LSL franchise,” the representative said. “They can recreate, re-release, redesign generally make all of the existing titles available on any platform they so choose. With new graphics, new controls and optimized for touch screen, analog controls, or whatever control systems [the] platform uses.”

I think everyone can agree that touching the screen to interface with a character’s body parts is exactly the direction that Leisure Suit Larry needs to compete in today’s market.

There’s no timetable on when the remake will be released or when we can expect a new LSL title, but I’m glad that Replay has its top men working on it in Al Lowe. Top men.