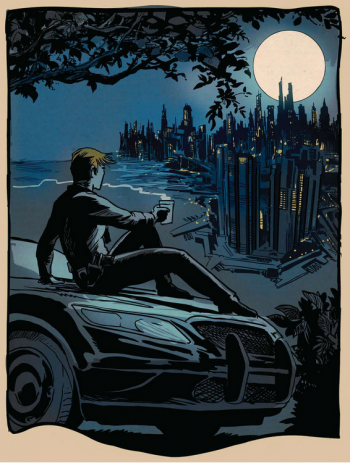 J.H. Williams and W. Haden Blackman will leave after issue 26, in December.

“We’re both heartbroken over leaving, but we feel strongly that you all deserve stories that push the character and the series forward,” say Batwoman co-authors J.H. Williams and W. Haden Blackman. “We can’t reliably do our best work if our plans are scrapped at the last minute.” The authors put a lot of work into story planning, often working five story arcs in advance, but there were problems at the publisher. DC started putting its foot down over many plot points, including showing Batwoman, Kate Kane, and her girlfriend Maggie Sawyer getting married. This editorial interference forced the duo to drop story lines and plot arcs that had been a year or more in the making, and always “came at the last minute,” according to a blog post by the writers. Frustration piled on top of anger, and before long the pair decided to ditch the title. Issue 26 of Batwoman, appearing in December, will be their last.

“We are extremely thankful for the opportunity to work on Batwoman,” say the writers. “It’s been one of the most challenging and rewarding projects of our careers.” It’s anybody’s guess what will happen to Batwoman after December. The prohibition – as the writers describe it – against showing Batwoman’s marriage presumably means it won’t happen; or if it does, it will be off stage, and out of sight. It was the marriage, Williams Tweets, which was the final straw; “we fought to get them engaged,” says Williams, “but were told emphatically that no marriage can result.” Williams also confirmed that this problem won’t stop him from working on Sandman or Vertigo projects.

Blackman is a writer of two decades standing, who has worked in videogames – Star Wars: The Force Unleashed – and co-founded an independent development studio, Fearless Studios, as well as working in comics. Williams is a comic books guy with a very long history. Under their tenure, Batwoman became an award-winning New York Times #1 bestseller. “The thing that really attracts me to Batwoman as a character is her combination of a really strong, personal story and a dark, superheroic one,” said Williams when he and Blackman first began working on the series back in 2010. It would seem the strong, personal story was something DC couldn’t stomach.

XCOM: Enemy Within Video Lets You Punch Sectoids With Style