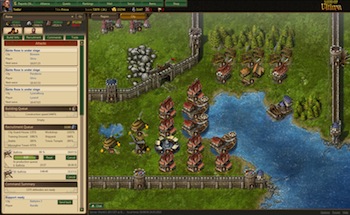 The F2P strategy game tenuously connected to the venerable Ultima series shuts down.

Time for a personal confession: I have never understood browser strategy games. I mean, my attention span is long enough to know how the games work, but I still can’t believe that the appeal is wide enough to support the millions that seems to exist. EA’s connection to Ultima was already that of a conquering usurper, so the announcement that the series would continue as a browser-based strategy game was as insulting as the avatar asking “what’s a Paladin?“. Now, after four years of life, Lords of Ultima is falling into the Ethereal Void and shutting down as of May 12th.

Lords of Ultima followed the typical constraints of the genre. Players are initially in command of a single city. From there, they build and upgrade buildings, harvest resources, and recruit troops, all with lots of waiting involved. As usual, players could skip that waiting with some cash. With the announcement of the impending apocalypse, EA has disabled the ability to purchase more “Play4Free Funds” and is encouraging players to spend what they have while there’s still time.

The game’s connection to the Ultima franchise was tenuous at best. It wasn’t even set in Britannia, but the new land of “Caledonia” instead. However, it DID feature the Eight Virtues, and controlling land around each of the shrines would grant bonuses to players. However, battling over shrines of “compassion” and “humility” seem ironic and best, and a complete lore break at worst. Perhaps the best way to think of Lords of Ultima is to pretend that these are the false virtues, and EA is actually Lord Blackthorn. Anyways, there are still a few months left if any of the curious wish to take a peak before it all goes black.