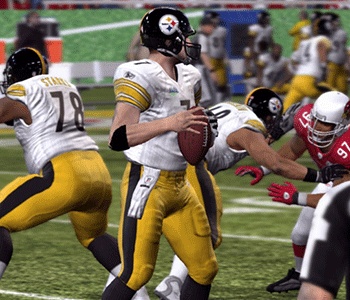 Industry analyst Colin Sebastian says Madden NFL 2010 is off to a slower than expected start, but is it slow enough to put a frown on the face of Wolfenstein lead designer Manveer Heir?

Although it was only released five days ago, analyst Colin Sebastian of Lazard Capital Markets said Madden NFL 2010 isn’t performing quite as well as expected at this early stage. “Checks suggest Madden is trending slightly below plan out of the gates,” he said. “Our weekend and recent channel checks indicate sales of Madden NFL are trending flat to slightly up at specialty retail, but somewhat lower than expected in other channels.”

He added, however, that price cuts to both the PlayStation 3 and Xbox 360, and the inevitable spending that comes with the back-to-school season, could spur the sales back to predicted levels.

But as GameDaily notes, the 2009 edition of the game only saw a six percent gain in August last year, a relatively tiny amount compared to overall game sales in the period that compounds the impact of this sluggish early performance. It might be going too far to suggest that people are finally getting tired of shelling out big bucks year after year for incremental improvements to a franchise that’s been around for two decades, but I wouldn’t be surprised to find that as the economy continues to flounder and money remains tight, replacing the 2009 edition with the 2010 release becomes somewhat less of a priority.

None of which is particularly good news for Mannveer Heir, the lead designer on Raven’s recently released FPS Wolfenstein. Heir declared on his Twitter account last week that he would personally pay for everyone’s copy of Wolfenstein if it outsold Madden in the month of August. Hard numbers aren’t available yet but while Madden may be suffering from a minor case of franchise fatigue, Wolfenstein was released to generally solid reviews and a relatively unimpeded run at the FPS crowd. Hope your AmEx has a beefy limit, Manveer.