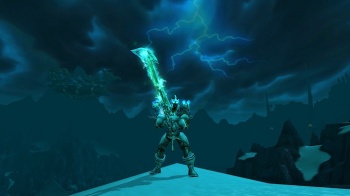 A bad situation is even worse than it sounds: A man on trial for the death of his infant son couldn’t tear himself away from WoW to keep the boy from suffocating.

A sailor from King’s Bay is currently on trial for his son’s death because he neglected to notice that the infant was suffocating under a pillow. However, the reason for the father’s neglect is being laid at the feet of popular MMO World of Warcraft: the man claims that he was so engrossed with the game that he couldn’t be bothered to remove the pillow.

On January 16, 2009, 29-year-old Andrew Warner’s son, Brendin, died at his Kingsland home. Warner stated that, while his wife was shopping with her mother, he babysat his son, checked on him repeatedly, gave him a pacifier, and played with him for a while before he placed the child on the bed in his and his wife’s bedroom. Apparently he put pillows around the infant so he couldn’t crawl off, which is when things turned tragic:

He had also told police of watching music videos much of the afternoon and logging on to a video game sometime after 3:30 p.m., Udy said. Andrew Warner had also said that when he got up from a computer game to go the bathroom, he noticed Brendin had “scooted” his head partly under a pillow, which he removed to find the boy breathing fine, Udy said. His wife arrived home later in the afternoon and found their child had died just as they were leaving to go his mother-in-law’s house for dinner, Warner told police.

However, six months after the boy died, an autopsy report revealed that the child had suffocated and Warner changed his story. He admitted that he had seen a pillow sitting on top of his son’s head and didn’t take the time to remove it. He also admitted that he’d heard the boy crying, but didn’t turn away from World of Warcraft until he had to go to the bathroom. On top of that, it turned out that records showed the man had been playing the game for much longer than he had told investigators.

According to Assistant District Attorney Katie Udy, “He wanted to get back to his game because … there’s no way to pause it. Andrew Warner left that pillow over Brendin’s head.”

The trial may wrap up today, but there haven’t been any updates. Aside from the manslaughter charge, is also facing charges of second degree cruelty to children, reckless conduct and making false statements to investigators. If Warner is found guilty, he could face ten years for involuntary manslaughter.

It’s awful when a little kid meets with tragedy, but this whole situation is particularly heartbreaking. While I’m not excusing what happened in any way, I can’t help but feel sorry for the entire family, Andrew Warner included.