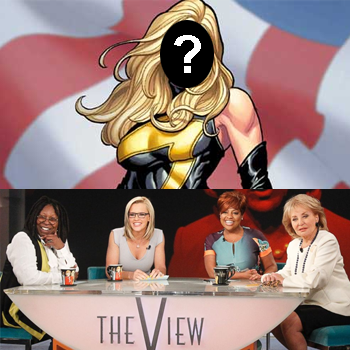 Developing: Marvel has issued a cryptic press release stating that the company will be making a major announcement on the Tuesday, July 15 episode of ABC’s The View, the all-female daytime talk show moderated by Whoopi Goldberg.

The bare-bones press release, which refers only to a “thundering new title,” has already touched off a wave of conjecture among fandom and the entertainment press on social media (which was almost-certainly the point) as to what, exactly, the announcement might be. Though it airs on ABC and is thus related to Marvel through parent company Disney, The View, is not typically considered an outlet for announcing comics properties – though it was the venue Marvel used to reveal the wedding of Northstar and his boyfriend Kyle back in 2012.

Many are guessing that, as The View targets an audience primarily of adult women, the “thundering” reveal in question will be the long-rumored Ms. Marvel movie; particularly since “thundering” seems to be a clue and Ms. Marvel has frequently sported a lightning-bolt symbol on her uniforms. However, the use of the word “title” also means it could easily be the announcement of a new comic book – though a solo series featuring Marvel’s most “thundering” female character, Storm, was already announced back in May. It’s also entirely possible that “title” could simply refer to the sub-title of the announced but yet-unnamed Thor 3.

The View airs weekdays on ABC from 11:00am to 12:00pm EST. It has not been specified at what point in the show or under what circumstances the “thundering announcement” will be made.