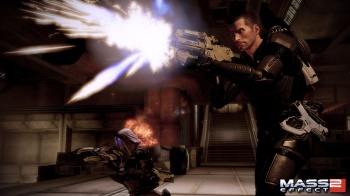 BioWare and FUNimation are partnering to create an anime feature film based on the Mass Effect universe that will be out in mid-2012.

There aren’t many videogames that are as ready-made for a feature film translation as Mass Effect. It’s practically an interactive movie in its own right, after all, and the vast universe in which it’s set is a fertile ground for storytelling. So it’s not too much of a surprise that BioWare is pursuing just such a project with anime production company T.O. Entertainment and distributor FUNimation, with Casey Hudson, the executive producer of the Mass Effect game series, taking on the sale role for the film.

“Over the last few years, we have revealed different pieces of the Mass Effect world through different media,” Hudson said. “Extending the story through an anime medium is another amazing opportunity for us.”

If this partnership sounds a bit familiar, it may be because a similar deal was announced last year for a Dragon Age flick. Animated film tie-ins have become kind of a “thing” for EA, in fact; Dead Space and Dante’s Inferno both got the film treatment too, although my compadre Mike Thompson says neither of them were very good. Those films were made in conjunction with a completely different producer, however, so hopes are higher for Mass Effect and Dragon Age.

The Mass Effect anime film is already in production and is expected to be released in digital and home video formats in the summer of 2012. The Dragon Age film, since we’re talking about it anyway, is due sometime this year.