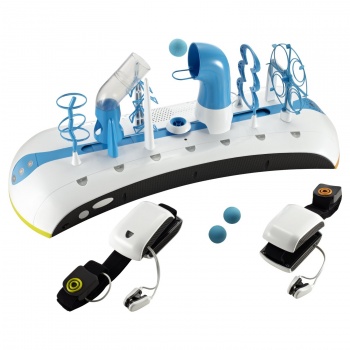 Mindflex Duel is a board game that forces players to use the power of their minds to overcome each other, literally.

A new game coming out of Mattel updates the company’s Mindflex experiment to include two players. With Mindflex Duel, combatants will finally be able to determine who truly has the greater mind power.

Mindflex works with what Mattel told CNET at CES 2011 is “real EEG science,” so it’s apparently not a ruse. Players wear headbands that evidently detect their brainwaves, which are fed into the game board and used to control a fan. The fan uses air to propel a ball along a track, with players able to raise, lower, and move the ball back and forth with only their thoughts.

Mindflex Duel makes the experience a 2-player game, with participants competing or cooperating to the move the ball through different types of courses in five different modes. One such mode is called Power Push, and challenges each player to be the first to push the ball into their opponent’s zone.

Assuming it actually works, Mindflex appears to be one of the next steps toward gaming with only our minds. The technology has reached videogames in conceptual form, but is apparently right here, right now with Mindflex. It might currently be used to push a ball around, but I don’t see why it can’t be easily transferred to a game like Monopoly.