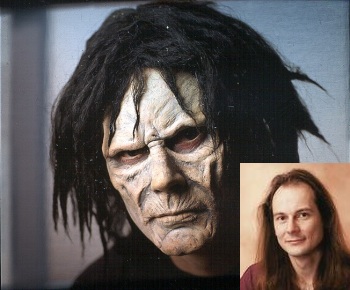 Meet the face behind the face on the front of Planescape: Torment.

Planescape: Torment is one of the most famous RPGs of all time. It also happened to come in one of the most famously ugly boxes of all time: a close-up of some guy with filthy dreadlocks and a face like chewed leather that’s made even less appealing thanks to a hideous blue-and-orange color scheme. Interplay managed to put together a semi-famous cast of voice actors for the game, but where did it ever find that awful, awful face?

Pretty close to home, as it turns out. The day before the cover photo shoot was scheduled to take place, the model contracted to appear on the box backed out over a scheduling conflict. With no time to arrange anything else, someone suggested that Guido Henkel, a producer on the game, should do the job.

“I thought it was a joke at first but everyone in the room looked at me and went, ‘Yeah, why don’t you?'” Henkel revealed on his blog.

Hollywood special effects wizard Tom Burman [who I am compelled to mention worked on the infamous Star Wars Holiday Special] was contracted for the job, so Henkel dutifully reported to his studio for about two hours of makeup work. “Applying layers and strips of latex to my face, he slowly transformed me into a demonic-looking creature,” Henkel wrote. “Then, to top it off, he hand-painted the entire makeup to give it a realistic look that would hold up under the glaring light of a camera.”

After 45 minutes of photography, it was time to take it off, which is when things got a bit ugly. “My face was red as a beet and burned for the rest of the day, because of the solvent that was used to remove the appliances,” he added. “Nonetheless, it was all well worth it.”

Along with Planescape, Henkel’s credits include Fallout 2, the Realms of Arkania series and Jagged Alliance. He currently operates dvdreview.com and has dedicated the past couple of years to writing the Jason Dark: Ghost Hunter series of “dime novels” that he publishes through his company G3 Studios. All very cool, but he’s got a long way to go before he out-cools his gig as gaming’s original Blue Man.