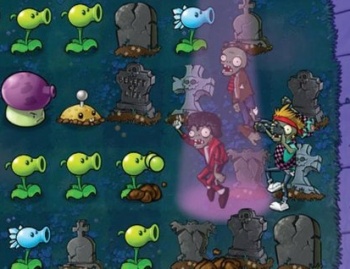 The family of the late King of Pop has taken offense to a Thriller-parodying brain-eater in PopCap’s popular Plants vs. Zombies.

Plants vs. Zombies is great for many, many reasons – and one of those reasons is the game’s sense of humor. It’s delightfully tongue-in-cheek with its various horticulture-based weaponry and flesh-eating undead, including one particular “dancing zombie,” who was clearly meant as an homage to the iconic dance break in Michael Jackson’s classic “Thriller” music video.

The latest update to PopCap’s relentlessly addictive original, however, replaces the dancing zombie’s distinctive red jacket (with matching pants) and curled hair for something more disco-themed. MTV Multiplayer reached out to the casual developer and found that the change had been made at the request of Michael Jackson’s estate.

I, for one, am kind of bummed. Sure, I guess a disco-themed zombie is all right, but Michael Jackson’s appearance in “Thriller” is the image of a dancing zombie. Considering that “Thriller” remains one of the most popular music videos (and albums) of all time years after its release (and after all of those weird lawsuits aimed at Jackson, too), why would you want to remove what was clearly a fond parody-slash-homage to it?

I’m not saying that the Jackson Estate might not have had legal grounds to stand on, and PopCap is doing the right thing in respecting the family’s wishes … but it just seems counterproductive to me.