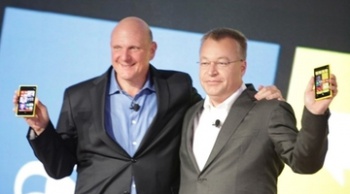 $7.2 billion goes to Nokia, and Microsoft gets patent licensing, 25,000 new employees in return.

The deal, announced in September 2013, sees Microsoft paying Nokia about $7.2 billion. Most of the cash covers the purchase, while about $2 billion covers fees for patents Microsoft will be licensing from Nokia.

Microsoft is responsible for about 90 percent of all Windows Phone smartphones in production (the Lumia line from Nokia), along with several other Nokia product lines. While plans might change in the future, Microsoft will be carrying on with Nokia’s low-end Asha line of devices, along with the Android-ish Nokia X smartphones.

“As Microsoft and Nokia Devices and Services come together as an expanded family, we will unify our passion, dedication and commitment to bringing you the best of what our joint technologies have to offer,” said Stephen Elop, former Nokia CEO and current Microsoft Executive Vice President, Devices & Services. “Together, we can connect and empower people with one experience for everything in their life in a world where it is mobile first and cloud first.”

The acquisition makes Microsoft a sizable hardware manufacturer, a space the software giant isn’t exactly used to (Xbox aside). With more direct control over a large swath of Windows Phone hardware, the future of Windows Phone is about to take a dramatic turn…for better or for worse.