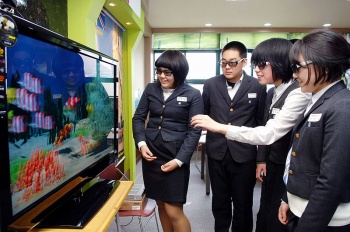 Microsoft says the 3D gaming technology being touted by Sony and Nintendo is “interesting” but still way too expensive for mainstream success.

If there’s a central theme at this year’s E3 aside from motion controls, it’s 3D. Both Sony and Nintendo have been pushing the third dimension pretty hard, Sony through 3D games on the PlayStation 3 and 3D televisions and Nintendo on its handheld 3DS. Microsoft, on the other hand, doesn’t seem to be too anxious to jump on that particular bandwagon.

3D is “an interesting technology of the future,” in the worlds of Microsoft U.K. honcho Neil Thompson, but apparently the distant future, not the immediate one. “If you look at the costs of entry into the living room and when that’s going to become mass-market, we think the offering with Kinect and the natural user-interface we’re bringing, that’s a more compelling proposition for consumers over the coming years than maybe looking at 3D at this point,” he said.

It’s a valid point. The PlayStation 3 relies on a 3D television and glasses, which offers a very compelling experience and a hell of a price tag, too; a 40-inch Samsung 3D LCD runs about two grand at Best Buy and glasses are $180 a pop. Have a few friends over on a Saturday night and suddenly you’re looking at a $3000 display setup. That’s not the kind of coin most people find lying under their couch cushions.