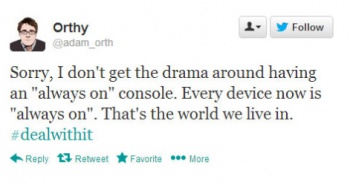 There are rumors that the successor to the 360 will require a constant internet connection (though, to be fair, there are also rumors that it will be hewed from the bones of children and powered by tears, so I’d take them with a grain of salt for now). Considering we have a rather recent example of how horribly wrong an always online launch can go, you’d imagine Microsoft would be doing its best to distance itself from said rumors. It isn’t.

Adam Orth, creative director at Microsoft Studios, has been doing some thinking about the concept of an always on console. His conclusion? He doesn’t get “the drama.”

“Sorry, I don’t get the drama around having an “always on” console,” he tweeted earlier today. “Every device now is “always on”. That’s the world we live in. #dealwithit”

“I want every device to be “always on,” he added.

Now, this is Orth’s private Twitter account and he quite obviously isn’t speaking for Microsoft in any official capacity, but his combative tone and disregard for seemingly valid concerns doesn’t seem to be winning him, or the company he works for, any fans.

“Sometimes the electricity goes out. I will not purchase a vacuum cleaner,” he commented, apparently in response to those who pointed out that their internet connection could be inconsistent.

He went on to double down on that questionable analogy:

“The mobile phone reception in the area I live in is spotty and unreliable. I will not buy a mobile phone,” he added.