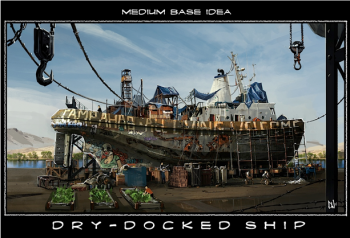 Undead Labs’ MMO project has been changed to an open-world zombie game for XBLA, but Microsoft Game Studios is publishing it.

Back in 2009, ArenaNet co-founder Jeff Strain established Undead Labs as a new game development studio. The studio was apparently working on a zombie-themed MMO, which sounded interesting, but it turns out that the game plan’s been modified a little. Instead of an MMO, the developer is now working on an open world zombie game for XBLA (a piece of concept art is seen here, sadly there’s no real zombie concept art available yet), and Microsoft Game Studios is publishing it.

It turns out that the Undead Labs is still planning to make the MMO, but this open world title is being used as a a way to develop the technology for the online title. The game, currently code-named “Class3”, certainly sounds ambitious. Strain said (via press release) “We plan to create an ambitious open world XBLA game and use its gameplay, setting, and technology as the foundation for a full online world game …The open world develops in real-time, shaped by player actions, with content determined by their choices and the ever-increasing zombie threat.”

Undead Lab’s got a follow-up title in the works, “Class4” which will be the aforementioned MMO. However, “Class3” ‘s open world will cut down on the MMO’s development time. That said, the biggest concern for Strain is to make a game that’s fun: “”Really what it comes down to is we just don’t think saying a game is an MMO or an online world is enough …To make it fun, you have to make sure you have a fun game first. We’re really focused on getting that core experience in place first.”