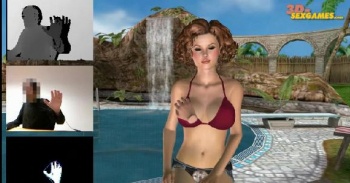 Kinect will never be used to perform sexual acts if Microsoft has anything to say about it.