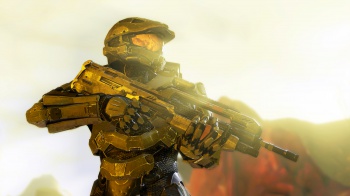 Conan viewers will have the first look.

Microsoft Studios has confirmed that Halo 4 will arrive worldwide on November 6, 2012, a full five years after Bungie’s third installment of the popular franchise’s core series hit shelves in 2007. Halo 4 will return to the tale of Master Chief but, for the first time, be handled by a new developer, 343 Industries.

Details are tight, but Microsoft has revealed that the game will be set a full four years after the events of Halo 3, and feature a story in which Master Chief must “confront his destiny” and “save the universe.” (Admit it, there’s no way you saw that coming). Though Halo 4 will continue the storyline set up from the first three games, it will mark a “new beginning” for both the character and the series, and kick off what 343 Industries is calling the “Reclaimer Saga.“

“We are beginning a new saga with Halo 4 and embarking on a journey that will encompass the next decade of Halo games and experiences,” said Phil Spencer, corporate vice president of Microsoft Studios. “Millions of fans worldwide have been eagerly awaiting the opportunity to step back into the boots of Master Chief, and, with Halo 4 leading the charge, we’re confident 2012 will be the most successful year in Xbox history.”

If you’re eager for more information, be sure to tune into Conan on TBS, April 17th at 11 P.M. PDT for what Microsoft is simply describing as “a special segment” celebrating the November launch of Halo 4. It remains to be seen if 343 Industries can match quality with the much-beloved Bungie, but I have a sneaking suspicion that the game won’t hurt for sales. After all, it does have the word “Halo” in the title.

New Baldur’s Gate Not Coming to Wii U