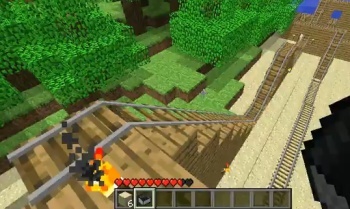 Despite being courted by both Valve and Bungie, the creator of Minecraft is set on forming his own game development studio.

Minecraft is undoubtedly the unexpected hit of the year. As of this morning, the sandbox building/survival game has sold 278,772 units through the game’s official website. At 9.95 British pounds per copy, that translates to over $3,787,748 total earnings, and the game isn’t even out of the alpha phase of development yet. When Minecraft enters beta, and eventually releases, the price-point is expected to rise. But even though it was reported that Markus ‘Notch’ Persson was approached by many AAA studios, he is starting up his own company, which is as yet unnamed.

“The status right now is that we’re up to four people confirmed, and we’re talking to several people,” Persson wrote on his blog this week.

Much of Persson’s time is occupied with the mundane details of staring a company. “Most my time these days is taken up by meetings and lawyers, accountants, banks, potential partners, potential employees, and the occasional interview,” Persson said. “The few hours I do have to develop the game every now and then are mostly spent on looking into bugs and replying to emails.”

Persson apologized to the community for not working fulltime on Minecraft, but it will ultimately create a better system for updates. “All this non-development work will result in a much nicer working environment, with talented people helping out with development, an actual office, and a much better way to deal with support issues, bug reports and feature requests.

All I can say is good luck to Persson. I know that it’s daunting starting up a new venture, but then again, I never had over $3 million in seed money. Based on the popularity of Minecraft, something tells me that Notch will be making games for a long time.

Source: The World of Notch via Gamesindustry.biz.