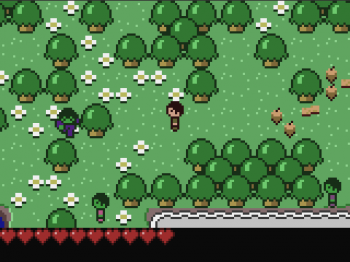 Punch trees and rocks for materials from your browser in Markus “Notch” Persson’s new, slimmer version of Minecraft.

Persson, known best as the man behind Minecraft, has created a new RPG, Minicraft, in only 48 hours. The game is a top-down action title, and plays like some sort of cross between Legend of Zelda and–you guessed it–Minecraft.

The game was created as an entry for Ludum Dare, a competition that asks game developers to code a game from scratch that accommodates a chosen theme of its selection. This contest’s theme was “alone,” (arguably a somewhat brilliant stroke of luck for Notch). Two days, and presumably lots of caffeine, later, Minicraft was born.

In Minicraft, you’ll wail on trees, mountainsides, and hordes of the undead while crafting new gear to aid your quest of annihilating someone known only as the Air Wizard. Here’s the official, slightly depressing, description of the game as posted on Ludum Dare:

“Arrow keys to move, C to attack and X to open the inventory and interact with objects in the world. The goal of the game is to kill the only other sentient being in the world, making sure you’ll be alone forever.”

The game is currently available for free in your browser or via download. Voting is now open for which title will take Ludum Dare’s top honors, so only time will tell if Minicraft is good enough to stand up to its stiff competition.