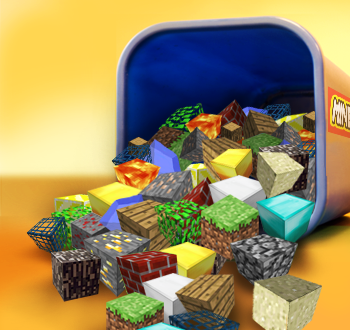 Lego’s not what it used to be, but that’s what we have Minecraft for.

In the good old days, Lego was about building things from your imagination, whereas now it’s is all about constructing blocky plastic replicas of X-Wings or the Batmobile. The modern sets, while impressive, no longer satisfy the urge to create that beats in the heart of every child – and plenty of adults too. Thankfully, we have Minecraft to pick up the slack, and in Issue 288 of The Escapist, Brendan Sears talks about the ugly village he built in the game, and the joy he felt as he slowly shaped it into what he saw in his mind.

When I came back I looked at my creation with a new set of eyes and starting stacking and hacking blocks all over the little town. What I wound up with was an ugly series of planks running between walls stacked four blocks high.

I schemed and planned, making planks and gathering wood. The design was simple yet ambitious, and I couldn’t help being excited as I experimented. It took several attempts but I eventually had a rough product of what I wanted, a series of four trees with elevated wooden paths leading between them. I proudly patrolled my suspended square and couldn’t stop planning the next steps. Should I continue with the paths or try and make a tree house to build around?

Then I realized: I could make them all. There was nothing stopping me from making what I wanted. I embraced the project along with all the mistakes and frustrations that go with installing a rolling mine cart to take me from tree house to tree house. The best part of my first creation was knowing every other player had a different version of the same story and that the process made them just as giddy as I was with the rediscovered joy of building something wonderful and unexpected.

With no objectives other than those the player sets him or herself, Minecraft harkens back to the days when the biggest concern with Lego was finding enough red bricks to finish a wall. You can read more about it in Sears’ article, “Minecraft Maniac.”