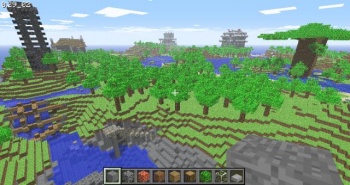 Minecraft is celebrating Halloween by making the game ever scarier, not that the cute pumpkins being added have anything to do with it.

Minecraft developer Markus Persson has announced that a fairly significant update will be hitting later this month on October 31, i.e. Halloween. While the addition of pumpkin cubes is a no-brainer, he’ll also be adding a whole bunch of other new features and implementing gameplay alterations.

But first: the pumpkins. Players will be able to carve Jack-o-Lantern cubes that can also be worn as helmets. Persson says the fashion statement is “useless,” but I couldn’t disagree more. Wearing a pumpkin on your head should be a feature of every game.

If you don’t have a pumpkin obsession like me, the Halloween update will still be something you’ll want to download. It’ll add a brand new “hell world” used for fast travel, which will apparently translate any movement within it to a much longer trip in the game’s normal world. Portal in and move 10 meters, and see yourself hundreds of meters away once you portal out.

New monsters dubbed “actually difficult” will be released, and players will face even more dangerous underground depths. With the update, the deeper players go, the brighter the surroundings have to be for them to stay safe. Even tougher, torches will now die, though they can be reignited with flint. Thankfully, lanterns are a permanent light source.

Players will also be able to use the game’s fishing rod to actually catch some fish come Halloween. A craftable watch is another new addition that will let players know when they can emerge from their hiding spots. Further, October 31 will bring with it the repair of certain bugs, the biome feature, better music, better sound effects, and possibly even more. I guess that all that money is really going to good use already.