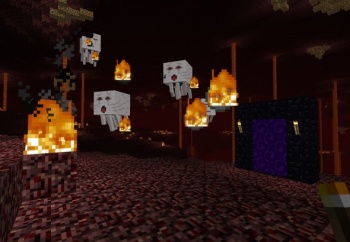 The scheduled Halloween Minecraft update will bring more to the game than the horrors of pumpkins.

Minecraft creator Markus “Notch” Persson has revealed some of the specifics behind the game’s upcoming Halloween update, including one particular addition that will really heat things up. By heat things up, I mean burn people’s faces off.

Notch divulged that a new creature called the Ghast will be added to Minecraft come Halloween. Ghasts are multiple-legged flying cubes with a face only a mother could love. Oh yeah, they shoot fireballs at you too.

Luckily, Ghasts can only be found in another new addition, the Hell region, and won’t be able to burn your house down. Hell (which may be renamed) was designed by Notch to give players a method of quick travel around the game’s massive world, which can reportedly be 8 times as large as the surface of the Earth. Players can travel to Hell by creating a frame out of obsidian and then setting the center on fire, which creates a purple portal. However, once in Hell, unlucky players will have to deal with lots and lots of fire.

Ghasts not only shoot fireballs, but those fireballs ignite Hell’s new red rock material that will burn forever unless doused. The advantage is that using Hell’s portal system allows players to travel faster than they would in Minecraft‘s original world by a 16 to 1 ratio. It’s a risk-versus-reward situation that sounds like it could get quite hairy. And hot.

Notch also revealed that six new block types will be added in the Halloween update, five of which will add a new function, and that the promised “biomes” feature, which generates various types of environments from tundra to desert, is planned for implementation. So look, if you think Notch isn’t doing enough work on the game and it makes you so mad that you’ve caused this DDoS attack, ease up a little because he’s still adding cool stuff. Notch is but one man and success came upon him pretty quickly.