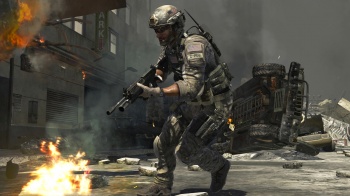 The next Call of Duty will make it easier for colorblind gamers to shoot each other in the face.

It really can’t be overstated just how popular Activision’s Call of Duty franchise has become these days, particularly among males in the 18-25 age group (or, say its detractors, among males significantly below that age group). As it happens, men are 20 times more likely than women to have some form of color-blindness condition, with an estimated 9-12% of the male population suffering from it.

While it hasn’t ever been a major issue in the gamer community like the well-publicized lack of dedicated servers in Modern Warfare 2 or general balance complaints, the lack of options for colorblind gamers – especially in a game where the difference between a red foe and a green ally can result in nigh-instant death – has been a point of concern for some. Black Ops added options for colorblind gamers, so would Modern Warfare 3 do the same?

According to a blog post by Sledgehammer’s Michael Condrey, it absolutely will. According to Condrey, the game’s developers estimate that “nearly a million gamers” who play COD almost every day suffer from at least some form of color-blindness. “I am happy to report,” he wrote, “that we are working on a Color Blind Assist option for Modern Warfare 3.”

Naturally, he joked, that meant that gamers couldn’t blame friendly fire on red-green deficiency anymore. Which is technically true.

Of course, it’s not like Call of Duty games ever need anything more than brown and grey huh, huh? Am I right guys?