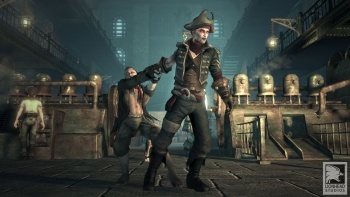 Fable designer and noted master of the understatement Peter Molyneux says Fable 3 will have “the greatest cast that any computer game has ever had.”

Okay, let’s be honest: Molyneux wouldn’t know understatement if it hit him over the head with a dog. As famous as he is as a legendary videogame designer and producer, he’s become almost as well known in recent years for promising gamers the moon but then never quite delivering. It’s grown into kind of an endearing quality over the years and based on his recent comments about the upcoming Fable 3, he’s still got the touch.

Fable 3 will have “the greatest cast that any computer game has ever had,” Molyneux told IGN. It’s a small but impressive group: Stephen Fry is returning to the series as Reaver, while John Cleese and Jonathan Ross have also joined the cast, Cleese as the player’s butler and Ross in an unspecified role.

“How we’re using these characters is very much dependent on how you play the game,” he continued. “This is not like traditional dialogue – we went into a studio with John Cleese and I think he’d never done anything like this ever before, because we had to say ‘if the player is like this, how are you going to react’. It was a very interesting process.”

I’ve never been a big fan of using celebrities for voice work in videogames. For every Wallace Breen there’s a XIII and while some high-profile actors provide excellent work – and I’m sure Fry, Cleese and Ross will number among them – their presence can be distracting. Patrick Stewart’s brief turn in Oblivion was great, but did anyone who played it not hear his voice and think, even for just a moment, “What’s Captain Picard doing in Tamriel?”

Fable 3 is currently in development at Lionhead Studios for the Xbox 360 and is scheduled for release by the end of the year.