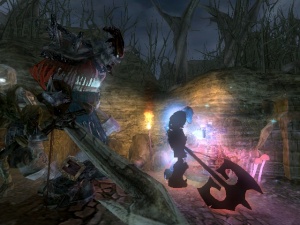 According to ambitious game developer Peter Molyneux, Fable II is not going to mark the end of the franchise.

The developer said he and his team at Lionhead Studios have a third, fourth, and even fifth Fable in their minds’ eye.

“It’s a big story arc, and you can see that if you’ve played Fable II you’ll recognize things from Fable,” (pictured) he said.

Fable II, an action role-playing-game which took 150 people three years to make, will be released in October.

Molyneux, who previously hinted at a desire to work on an MMOG, also said he may be working on a sports or racing game, explaining that he has always been “fascinated by challenges” and unimpressed with the limitations present in both genres’ current crop of games.

Go Into Space And Become Immortal With Richard Garriott

Discord and Rhyme: My Cowboys Have Always Been Heroes