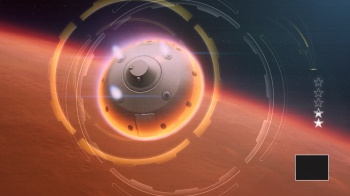 Experience the Curiosity rover’s terrifying descent to Mars for free.

According to staff at NASA, the scariest part of the agency’s upcoming mission to Mars will be the part where the Curiosity rover (known in official circles as the Mars Science Laboratory) catapults itself down through the Martian atmosphere at incredible speed. Nicknamed the “7 Minutes of Terror,” the drop depends completely on a frankly astonishing number of highly-sophisticated, fragile-looking components. To convey the difficulty of this manoeuvre, NASA has invited onlookers to give it go themselves using a free Kinect game now available on the Xbox Live Arcade.

Named Mars Rover Landing, the game tasks you with steering the Curiosity capsule through its perilous descent using bodily gestures that regular Kinect players will be familiar with. Players will have to keep the craft stable as it hurtles towards the ground at 13,000 miles per hour, ensuring that its parachute and other landing gear are properly deployed.

“We went to some pains to reflect some authentic details in the game experience,” said Jeff Norris of NASA’s Jet Propulsion Laboratory, the lab leading the Curiosity mission, in an interview with USA Today. “We are hoping that people a little bit of a taste of what we all are going to be going through late on the night of August 5.”

“This is one of the most tense and nail-biting periods of time that any of us face because during that time we’re waiting to see if all the work that has been put into not only the entry, descent and landing system, but into the vehicle itself pays off and produces for us a healthy rover on the surface of Mars,” continued Norris.

Interested space-fans not in possession of a Kinect can find a variety of other ways to experience Curiosity’s mission on NASA’s website.

August 5 is the set landing date for the $2.5 billion rover, which forms the main component of this ambitious mission to gather data directly from the surface of Mars. Should its real-life landing fail, the consequences for both the mission and NASA will be grave. With this in mind, it’s no wonder that the engineers and scientists behind the project sound so worried about the descent. Good luck, guys.

Source: USA Today via i09