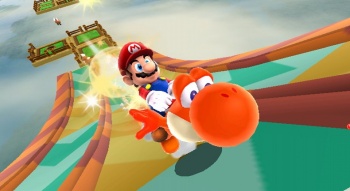 Nintendo is planning to release “a succession of Wii U titles” in the second half of 2013 to revive interest in the console.

The first few months of Nintendo’s newest console haven’t gone exactly as expected, but the Big N is planning a big Wii U push later in the year that could turn things around. According to CVG, a new 3D Mario game will be out by October, which will join Pikmin 3 and The Legend of Zelda: Wind Waker HD to potentially increase Wii U sales just in time for the holiday season.

A new 3D Mario title was mentioned during a Nintendo Direct presentation in January, though no release window was given. During the same presentation, it was revealed that the next game in the Mario Kart series would be playable at E3 2013, which is just a few weeks away.

Though Nintendo hasn’t confirmed the 2013 3D Mario release, a UK representative for the publisher did promise a big Wii U push in the second half of 2013. “From July onwards we will launch a succession of Wii U titles and we will promote these extensively until the end of the year. Marketing activity will include TV, print, online and PR as well as comprehensive experiential and social media campaigns,” she said.

Normally, I’d expect to hear more about Nintendo’s upcoming Wii U releases at its E3 press conference, but the publisher isn’t holding its traditional showing at this year’s event, which takes place in Los Angeles in June. The company has been using Nintendo Direct presentations to broadcast news to fans more and more this year, and it’s possible we’ll hear more about these games–and the rest of the Wii U’s 2013 line-up–in the next few weeks.

South Park: The Stick of Truth Still Coming in 2013