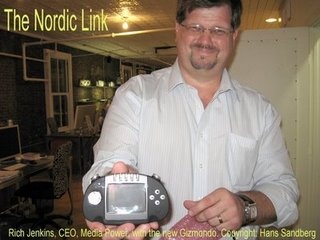 Videogame fans around the world are trembling with anticipation at the news that an all-new Gizmondo is ready for launch.

Richard Jenkins, CEO of mobile technology company Media Power, showed several of the devices to Hans Sandberg of The Nordic Link, claiming, “The rest are in the warehouse.” He added that a deal with a Chinese manufacturer is in place, and that the company is prepared to adjust production in the next year to meet demand for the device. The new Gizmondo is described as pretty much identical to the old Gizmondo, but packs a newer NVidia graphics chip and an improved battery.

Jenkins said Media Power is still “working on the price,” although it will probably be higher than the $99 proposed by his partner Carl Freer, the founder of the original Gizmondo. The unit will be powered by either Windows CE 6.0 or Google’s Android OS, although users will have to choose between one or the other, but the device will also be open to allow any Windows CE game to run.

The original Gizmondo launched in 2005 was but discontinued by February 2006 as Tiger Telematics, the Gizmondo manufacturer, was forced into bankruptcy. Poor sales were blamed for the failure of the Gizmondo, although certain other small matters involving the principal players – like involvement with organized crime, check fraud, impersonating a police officer, counterfeiting, embezzelment, and weapons and drug charges – were also considered by some to be aggravating factors.

Nonetheless, the future looks bright for the Gizmondo this time around. With few other high-profile competitors on the market, the stage looks set for a memorable “clash of the handheld gaming titans” between the Gizmondo and the Nintendo DS, which managed to exploit the surprising downfall of the Nokia N-Gage in 2003 to move to the top of the portable gaming market. While the DS holds the advantage of being first to market and has by now taken a sales lead in the neighborhood of about 80 million units, the more feature-rich Gizmondo, with its greater appeal to the gadget-conscious 18-35 male demographic, may yet prove to be the ultimate category-killer.

The new Gizmondo is scheduled for roll-out in November or December this year, hitting store shelves like a Ferrari Enzo running into a telephone pole. Watch for it!