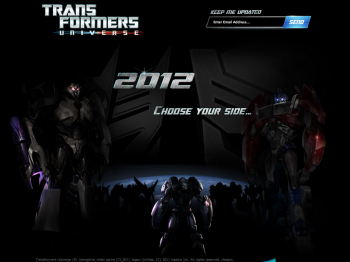 Not only does the new MMO have a name, but it’s going to be on display this weekend.

Not too long ago, it was revealed that Jagex was working on an MMO based on the popular Transformers franchise. Now, the game has an official name (Transformers Universe), an official website, and an official sign up for the game’s official newsletter. So, it sounds like the game is officially official.

Transformers Universe is going to be a free-to-play browser-based MMO, much like Runescape (which is also developed by Jagex). Other than that, details are kinda sparse, but Jagex is promising to release a lot more information at this weekend’s BotCon (the official Transformers fan convention in Pasadena, California).

Jagex will apparently be showing off the game at the convention and is promising that folks in attendance “will be the first to see the graphical style and direction for the game.” Based on the placeholder graphic on the homepage, it seems like the game will be embracing the visual style of the original cartoon series instead of the look from the Michael Bay films (which, let’s be honest, can only be a good thing).

Activision CEO Thanks EA for Raising Awareness of COD