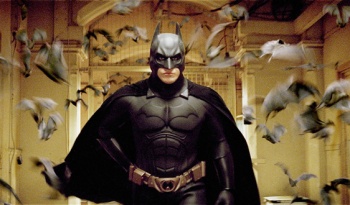 The new head of Warner’s film division, says he has a couple big things in mind for the company’s DC film properties.

Jeff Robinov, the new head-honcho of Warner Bros’s motion picture division and therefore the guy who makes the call on what movies do and do not get made, has set in motion a scheme to reboot the Caped Crusader- again -for inclusion in a Justice League movie to come out sometime in 2013.

While the decision to reboot seems silly considering the company has a Batman movie currently in production, it actually makes a certain amount of sense. Nolan’s Batman is, as far as superheroics go, rather realistic. There is just no room in that world of gritty Jokers and dark Two-Faces for immense space station bases, alien attacks, or team-ups with impossibly strong, invulnerable people who shoot laser beams from their eyes.

While Warner has several DC hero movies in the works, including Green Lantern, Superman, and The Flash, the studio is thinking about taking an approach to their superhero team-up opposite to Marvel’s. Where Marvel is giving every hero their own movie to build up backstory and recognition before putting them all in an Avengers film, Warner wants to throw every hero they have rights to in one massive super-powered extravaganza, and see which ones click with the public. Only once they have proven to be hits shall DC heroes receive movie franchises.

This isn’t the first time Warner has tried to get a Justice League movie up and running; back in 2007, a movie was close to entering production, but the Writer’s Guild strike and the success of dark-n’-gritty Batman shot it down before it ever left the gates.

Understanding that Christopher Nolan is pretty much the best chance Warner has at making a half-decent Justice League movie, it’s already attached him and his wife Emma Thomas to the film as producers, and is currently discussing with them exactly what steps need to be taken to make sure this movie gets made, and made well.

Source: The L.A. Times via I Watch Stuff