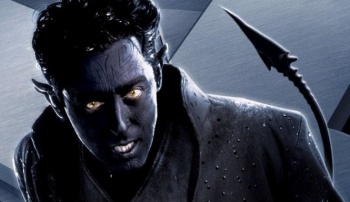 When X-Men: Days of Future Past hits theaters next year it will serve two purposes. First, as you’d expect, it stands as a sequel to the surprisingly good X-Men: First Class. We all knew that coming in, but what has only recently emerged is evidence that the film will also be something of a reunion for a huge number of the prior decade’s cinematic X-Men. We’ve known for quite a while that Hugh Jackman would appear as Wolverine, and we recently brought you word that Halle Berry will also reprise her role as Storm. As of this morning, we’ve also learned that Alan Cumming will once again don the blue makeup and prehensile tail he wore as Nightcrawler first in X2 and then later in X-Men: The Last Stand.

The only question now is how Cumming’s Nightcrawler might fit into the story. The idea of bringing back all the older X-Men should work out nicely given the time-hopping plot of the comic book tale the film is based on, but unless I’m completely misremembering a childhood wasted on Marvel’s books, Nightcrawler wasn’t a huge part of the Days of Future Past storyline. If anything, this appears to simply be an attempt to wink and nod at fans of the previous X-Men films. Whether that appeals to you or not depends on how well you liked those movies, but if that’s the sole reason for including Cumming in the cast, we’d rather they just leave him out.

Then again, at this rate Days of Future Past will be populated almost entirely by the cast of the older X-Men movies. On the one hand, that means that Vinnie Jones’ terrible Juggernaut might appear in the movie. On the other, it means that Vinnie Jones will actually be getting work outside of direct to video sequels to terrible action movies and British talk shows. Fingers crossed that it works out this way, as no one should have to spend that much time with Graham Norton.