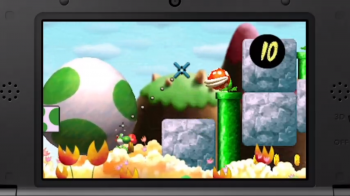 A new Yoshi’s Island title is headed to the 3DS, and that’s all Nintendo will tell us.

A few moments ago, during Nintendo’s periodic online press conference known as Nintendo Direct, company president Satoru Iwata revealed the existence of the upcoming Yoshi’s Island 3D. Despite its simplistic title, the game is described as an entirely new entry in the Yoshi’s Island franchise, which serves a sequel to the Yoshi’s Island DS.

Unfortunately, that’s almost the full extent of what Iwata was willing to reveal on the game. He claims that this latest Yoshi’s Island sequel has been designed from the ground up to take advantage of the 3DS’ unique capabilities, but failed to offer specific examples or even hypothetical ones.

Likewise, we have no release date on Yoshi’s Island 3DS. Iwata says the firm will have more on the title relatively soon, so it looks like we’re in for a bit of a wait.

As you can see from the screenshot embedded above however, you don’t have worry about how Yoshi’s Island 3DS will look. It maintains the pseudo-water color aesthetics of its predecessors, and in motion it looked very similar to the titles that came before it. That, if nothing else, seems promising.