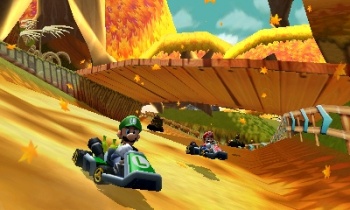 Don’t worry if you’ve already bought a 3DS; that extra money you spent will get you a ton of free games.

Nintendo has announced that it will shave eighty bucks off the price of the 3DS in preparation for the Holiday season. Nintendo of America President Reggie Fils-Aime says that this is a great time for anyone who was on the fence about buying a 3DS to pick one up.

The price drop will come into effect on August 12th, less than six months after the 3DS’s launch, with the recommended retail price going from $249.99, to just $169.99. Nintendo said that the new price point made the 3DS even better value than before, and added that there were some great games for the handheld in the pipeline, even going as far as to say that it had the strongest lineup of any videogame console this holiday season. These games include the 3DS re-release of Starfox 64, and new Mario, Mario Kart and Kid Icarus games.

With the price drop coming so soon after the launch of the 3DS – and Ocarina of Time, one of its most high-profile games – there are plenty of people who will be rather understandably upset at having paid a higher price. Fortunately, Nintendo doesn’t plan to leave those people out in the cold, and is offering 20 free downloadable games to anyone who bought a 3DS at the higher price that signs in to the 3DS eShop before August 12th. Doing so will automatically enroll them into the 3DS Ambassador scheme as well as entitle them to 10 free NES virtual console games, and 10 free GBA games. Nintendo has not published the full list, but has revealed that it includes classics like Super Mario Bros. and Legend of Zelda, as well as games like Mario Kart: Super Circuit, and Metroid: Fusion.

While this is good news for anyone who wanted a 3DS but didn’t want to spend $250, it’s hard to see it as anything other than an effort to boost sales. It’s no secret that the 3DS didn’t sell as well as Nintendo would have liked, and such a dramatic reduction in price after such a short period of time seems like little more than an attempt to increase the install base. Of course, if it works, then Nintendo could very well be laughing all the way to the bank, especially with so many big titles on the way.