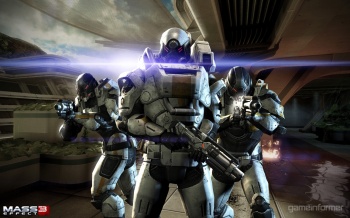 BioWare says there will be no “meaningless behind-the-scenes stat games” in Mass Effect 3 and that everything the player does will have a real impact on combat.

Mass Effect Senior Designer Christina Norman told OXM that when it comes to blending shooter action and RPG elements in Mass Effect 3, the focus is on ensuring that nothing is wasted. “We want to enrich the role-playing aspects of the game, while making sure that they’re always meaningful in combat,” she said. “We don’t want to have any meaningless behind-the-scenes stat games, where the output is very minor in combat. Every single thing you do has a real impact in the battle.”

I find it difficult to imagine how Mass Effect 3 will be even more streamlined than Mass Effect 2, which was itself a stripped-down RPG experience compared to the original Mass Effect. But Norman said while numerous improvements are being made, they won’t be so obvious this time around.

“We got combat the way we wanted it for ME2, so you’re going to feel right at home straight away,” she said. “But there are so many subtle improvements that you’ll miss them if you go back.”

The role-playing nerd in me bristles at the suggestion that “behind-the-scenes stat games” can be so easily tossed aside and I’m a little iffy about the apparent focus on combat above all else, but I have to admit that similar reservations about Mass Effect 2 dissipated very quickly once I actually started playing the game. Calling Mass Effect an RPG is a pretty serious genre stretch at this point, but that doesn’t mean it won’t be a hell of a good game when it comes out.

BioWare announced yesterday that Mass Effect 3 has been pushed back from its planned launch target at the end of 2011 so that it can be tweaked to appeal to as wide a market as possible. The game is now scheduled to come out in early 2012 for the PC, Xbox 360 and PlayStation 3.