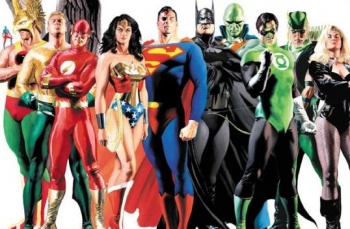 One Million Moms wants DC Comics to keep its heroes in the closet.

DC Comics announced earlier this week that one of its “iconic” superheroes is gay. Which one? That won’t be revealed until sometime in June (my money’s on Flash), which gives the One Million Moms, a conservative Christian activist group formed by the American Family Association, some time to do its worst to put the brakes on the whole thing.

DC originally intended to make its first openly gay superhero a brand-new character, but then reevaluated its position and decided to simply use the DC universe “reboot” to reintroduce one of its existing characters as gay. For the Million Moms, that took the situation from uncomfortable to intolerable.

“Parents may have been able to avoid a new character since it would not be one many children have grown to admire,” the group wrote on its website. But now, a superhero that kids have grown up with will suddenly have the gay. “Who will they choose; Batman, Superman, Flash, Green Lantern, Plastic Man, or another one of their characters that children look up to?”

And that’s not all! In an even “more shocking” twist, Marvel superhero Northstar, who came out in the mid-90s while still a member of Alpha Flight, recently married his man. “Children desire to be just like superheroes. Children mimic superhero actions and even dress up in costumes to resemble these characters as much as possible,” they said. “Can you imagine little boys saying, ‘I want a boyfriend or husband like X-Men?'”

“This is ridiculous! Why do adult gay men need comic superheroes as role models? They don’t but do want to indoctrate [sic] impressionable young minds by placing these gay characters on pedestals in a positive light,” they continued. “These companies are heavily influencing our youth by using children’s superheroes to desensitize and brainwash them in thinking that a gay lifestyle choice is normal and desirable.”

In response, One Million Moms is calling upon its membership – which is substantially less than one million, by the way – to email both DC and Marvel “urging them to change and cancel all plans of homosexual superhero characters immediately.” Unfortunately for the Moms, it’s too late to do anything about Northstar, as his wedding went down a couple days ago in Astonishing X-Men issue 50, but there’s still hope for Flash! (Or, you know, whoever.)

The whole thing is beyond odious, and the suggestion that exposure to gay superheroes could somehow “indoctrinate” children into homosexuality betrays a stunning level of ignorance, fear and even hatred. On the upside, the actual influence of the One Million Moms seems minimal at best. Northstar’s may be the first same-sex wedding for a superhero but he was actually beaten to the altar by a couple of Archie Comics characters; that wedding attracted the ire of the OMM as well, but the campaign to force the book out of stores backfired, as the issue quickly sold out.