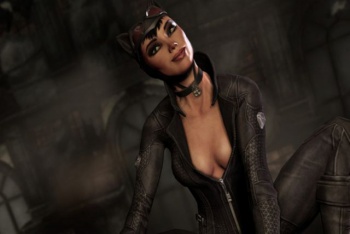 You’ll need either a new copy or an online pass if you want to try that whip out for yourself.

When it was revealed that Catwoman would be a playable character in upcoming release Arkham City, we all stopped for a moment to nod our heads in approval. Now, however, Warner Bros. has confirmed that you’ll only be able to bounce Gotham’s premiere jewel thief around the city if you’ve purchased either a brand new copy of the game, or an online pass.

In response to questions from Eurogamer about Catwoman’s status, Warner Bros. revealed that, “Players who purchase previously owned copies of Batman: Arkham City can access the playable Catwoman content [by buying the Batman VIP Pass] for £7.99 [around $12]/ 800 Microsoft Points.” The statement adds that playing as Catwoman is not required to complete the game.

Either redeeming the code packaged with new copies of Arkham City or purchasing an online pass will unlock Catwoman’s missions, as well as her character in the Riddler’s Revenge challenge mode. She will still appear as a non-playable story character regardless of whether or not you have an access code.

Given how amazing she looks in this trailer (those heels burn), it’ll be a disappointment for second-hand buyers to learn that Warner Bros. won’t allow them to pilot Catwoman around Gotham without paying up. Although having her as a playable character isn’t essential, the promise of some cat-based gameplay will still have been a big draw for many fans. But hey, we still get Robin, right?

Batman: Arkham City will be released for Xbox 360 and PS3 on October 18th.