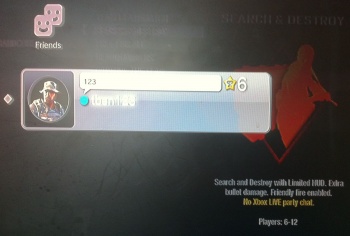 Treyarch’s latest update to the PS3 version of Call of Duty: Black Ops refers to features that the PS3 doesn’t even have.

You know, software development is an exceptionally complicated thing, particularly when it comes to games. There are hundreds of thousands of lines of code that can all tangle up together when a player does the exact right thing in the exact right location at the exact right moment – something developers could never catch. For the most part, I’m inclined to give game makers a break when their games have a bug here and there (though some games are more egregious than others in this regard).

But then there are issues that could have been avoided by having a simple copy editor on staff. Like this one:

It’s likely just a simple mistake – someone copied and pasted the text in question and forgot to take the offending part out – and it’s certainly not like it hurts anyone; it’s just kind of funny. That said, the timing is a bit unfortunate for Treyarch, given the recent formal complaint about the alleged inferiority of the PS3 and PC versions of the game in comparison to the one on the Xbox 360. It certainly won’t help PS3 owners feel like they’ve gotten a fair shake.

In a twist of situational irony, patch 1.06 was meant to address some of those very complaints from PS3 owners. Oops.

Though, looking at it in a positive light, the message is technically true: When played on PS3, the Search & Destroy game type will not support Xbox Live party chat. In fact, none of them will!

(Call of Duty Forums, via CVG)