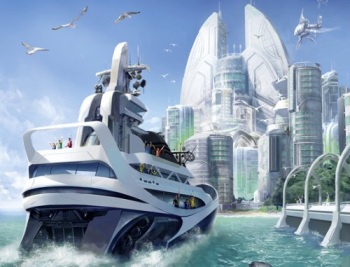 For a particular sub-species of PC gamer, there are few thing more exciting than testing a new lineup of video cards. The process of properly measuring and comparing voxellation and pixeltrons and tri-gigaboobs is stringent and time-consuming, but also incredibly informative and even entertaining, like a digital-era horse race. But when Guru3D tried to do a video card roundup with Ubisoft’s relatively new Anno 2070, it ran into a bit of a snag. A snag called – surprise! – DRM.

Like many PC games these days, Anno 2070 can be activated a total of three times, which seemed perfectly fine to the reviewer: one for his personal system, one for the AMD test rig and one for the Nvidia setup. That was fine and dandy, until the reviewer pulled the GTX 580 from the Nvidia system and dropped in a GTX 590 for the next round. Suddenly the game demanded an activation, but when the activation key was entered a message popped up stating that the key had been used up and no more activations were available.

“Once we inserted that GeForce GTX 590 the hardware ID number hash changed rendering our activation invalid,” the site explained. “This means that if we’d like to make a VGA performance review on Anno 2070 we’d need to purchase the game seven times. Ubisoft claims that you can send an email towards their support so that the activations are reset, we did so – yet are still awaiting [a response].”

That conclusion was later confirmed by Ubisoft’s marketing team in the Netherlands, where Guru3D is based. “Sorry to disappoint you – the game is indeed restricted to three hardware changes and there is simply no way to bypass that,” it said in response to an inquiry. It also declined to give the site seven copies of the game to work with.

There’s a reasonably happy ending to the story, at least for Guru3D: Ubisoft Blue Byte, which actually created the game, “unlocked” the key so the site could use the game in future tests without a lot of horsing around. The rest of us, however, remain pretty much hosed – a sadly common situation when it comes to Ubisoft DRM.